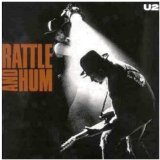 Rattle and Hum album cover
Track list: Helter Skelter, Van Diemen's Land, Desire, Hawkmoon 269, All Along The Watchtower, I Still Haven't Found What I'm Looking For, Freedom For My People, Silver And Gold, Pride (In The Name Of Love), Angel Of Harlem, Love Rescue Me, When Love Comes To Town, Heartland, God Part II, The Star Spangled Banner, Bullet The Blue Sky, All I Want Is You.

Inspiration for the material on Rattle And Hum was drawn largely from U2's fascination with the USA. As kids growing up in Dublin, America seemed a world away - a country where anything was possible. Years later U2 would see another side to American life where poverty, crime and despair were all too common. As Bono put it : "There was the dream and the nightmare side by side. "After meeting and talking with Bob Dylan at Slane Castle in July 1984, Bono realised that he, an Irishman knew nothing about the Irish music that Dylan, an American, found so inspiring. In January 1986 Mick Jagger and Keith Richards introduced Bono to the music of people like John Lee Hooker and Robert Johnson, while the rest of the band were also listening to the likes of Woody Guthrie and Johnny Cash as well as traditional Irish music. During the Joshua Tree tour of the US in 1987 the band became increasingly inspired by the raw intensity and emotion of these musical genres, which contrasted sharply with the bland manufactured sound of many of current bands at that time. The process of recording Rattle And Hum reflected this as modern technology was largely abandoned in favour of the equipment that was in use during the early years of rock 'n' roll.

U2 paid a special visit to Sun Studio in November 1987 to record 'When They Lay Jesus Christ In His Grave' for a Woody Guthrie memorial album. Using guitars and mics from the 1950s to get an authentic sound, and under the control of 'Cowboy' Jack Clement (who had worked with Jerry Lee Lewis, Carl Perkins and Elvis), four more songs were eventually recorded: When Love Comes To Town, Angel Of Harlem, She's A Mystery To Me, and Love Rescue Me. The recording session was filmed and later appeared in the Rattle And Hum movie.

The LP contained a couple of cover versions: Helter Skelter (The Beatles) and All Along The Watchtower (Bob Dylan), and a couple of brief songs from other artists: Freedom For My People (John Lee Hooker) and The Star Spangled Banner (Jimi Hendrix). In the intro to Helter Skelter, Bono used the phrase "This is a song Charles Manson stole from The Beatles...we're stealing it back", which he later said was a terribly pretentious thing to say - even for him!

The LP's title came from a line in Bullet The Blue Sky: 'In the locust wind...comes the rattle and hum'. It was produced by Jimmy Iovine, who had earlier worked on Under A Blood Red Sky, and spawned U2's first UK number one single - Desire. Angel Of Harlem, When Love Comes To Town, and All I Want Is You were also released as singles but without the success of Desire.

It was decided to make a concert documentary film of U2, primarily to supersede the old Redrocks video which by 1988 was becoming a little dated. The relatively unknown director Phil Joanou was chosen to make the film, which was to be a mixture of concert footage and a look at America through the eyes of U2. Two shows were to be recorded - one indoors in Denver (filmed in black and white to better capture the intensity of the atmosphere in an enclosed space) and one outdoors in Tempe Arizona.

The most highly charged moment of the film was when Bono made a passionate speech against the support that many Irish-Americans give to the republican terrorist campaign in Northern Ireland without knowing anything about the situation here (I live in NI myself). That very day, eleven people had been killed in an IRA bomb at a Remembrance Day ceremony in Enniskillen. Bono angrily challenged the idea that what was going on in Ireland was somehow 'glorious', before giving an emotional performance of Sunday Bloody Sunday. It was to be several years before the band felt able to play that song again, such had been the strength of feeling on that night. After the movie's release, Bono received death threats from terrorist groups who were angry at his outspoken condemnation of their violent campaign, and the resultant drop in funding they received from the US.

Go on to Achtung Baby page...