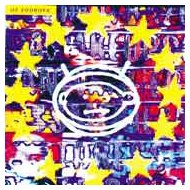 Zooropa was an album that came about almost by accident. After completing the first leg of the ZooTV tour at the end of 1992 (106 shows in 12 countries so far) U2 had taken a well earned break for a few months. However, finding it hard to settle back into 'normal' life (especially Edge who had recently split from wife Aislinn) the band channelled their energy into recording some new material. It was thought that this might form the basis for a film soundtrack or perhaps an EP for release at the start of the next leg of the tour, as no-one seemed to want to admit that this could turn into the next U2 album. As it turned out, the songs that had been written more than justified making an LP out of them - in fact some ('If God Will Send His Angels', 'Wake Up Dead Man' and 'If You Wear That Velvet Dress') were carried over to appear on Pop.

Brian Eno and Flood were at the controls for Zooropa. Eno's ability to mediate between conflicting opinions within the band made the recording process as painless as possible. As with Achtung Baby, experimentation was the name of the game, as the band incorporated rap and hip hop influences in their music. Flood's contribution was more understated, but nonetheless just as important, manipulating the tracks until he was completely happy with them.

Many of the songs for Zooropa were recorded in the old U2 style, ie all four members getting together and jamming some improvised tunes until something good came out of them. This was a welcome return to unity after the strained relations which were apparent during the recording of the previous album. Even so, songwriting and recording had become hard work. In the early days new songs could be written in no time, and albums produced in a few short weeks, but those days were long gone. However, the recording did have to finish before the upcoming second leg of the ZooTV tour, which was imminent. So imminent in fact, that the band knew that they would have to begin the tour without playing any of the new songs which were not yet rehearsed enough to be ready for live performance.

Zooropa was always going to be an unusual album. Lacking the more ordered structure of earlier U2 releases, the songs that were considered for inclusion were often disjointed and distorted. Examples would include tunes such as 'Daddy's Gonna Pay For Your Crashed Car' (which features a fanfare taken from an album named 'Lenin's Favourite Songs' and a sample from a song by MC 900 Ft Jesus named ' The City Sleeps') and 'Numb'. The latter holds the distinction of being the first U2 song to feature three of the band singing different parts (Bono, Edge and surprisingly Larry). The final song on the album, 'The Wanderer' is unique in that the none of U2 performs the lead vocal - the song was written specially for country music legend Johnny Cash.

Brian Eno played a significant part in the making of Zooropa over and above his contribution as producer, providing some vocals and keyboards on songs such as 'Lemon' 'The First Time' and 'Stay (Faraway, So Close!)'. This last song was used by Wim Wenders in the 1993 film 'In weiter Ferne, so nah!' (ie. German for Far Away, So Close!), and he also directed the video for it. Latterly, Bono has worked with Wim Wenders again on his Million Dollar Hotel project.

One thing about Zooropa that is a little strange to say the least, is the odd siren noise that appears about 30 seconds after the last song, 'The Wanderer' has finished. It lasts for about 25 seconds, but it's possible that many listeners don't even know it's there, as there is plenty of time to turn the CD off before it starts. Some say that it's a tribute to The Beatles, who had a continuous sound at the end of the Sergeant Pepper's album which didn't stop until you physically turned it off. Others say it is similar to the alarm used by radio DJs to warn them of 'dead air'. If you haven't heard it yet...have a listen. You may as well get your money's worth. :-)