All That You Can't Leave Behind Album 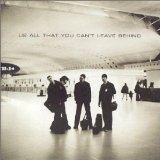 All That You Can't Leave Behind album cover
Track list: Beautiful Day, Stuck In a Moment You Can't Get Out Of, Elevation, Walk On, Kite, In a Little While, Wild Honey, Peace On Earth, When I look at The World, New York, Grace, The Ground Beneath Her Feet (bonus track).

All That You Can't Leave Behind was first released (in an individually numbered cardboard sleeve - mine is 115621) on 25th October 2000 in Japan, and then over the following few days the rest of the world got their first chance to have the finished article in their hands, until the 31st October, when it was released in the United States. After a 3 year wait since 'Pop', fans were eager to hear if the rumours were correct that the new album would be a return to a previous U2 era, less influenced by electronic efects and the like. Many had already heard clips which had been released through U2.com, but some preferred to wait until the launch was official (I was one of them).

Bono said that he didn't want people to view this as a return to a "rootsy, bluesy" style, as that had never really been what U2 had been about. Larry has also stated that this is not a backward step, rather a continuation of what U2 has always done i.e. experimenting with different sounds. Despite that, most critics have said that there is definitely more than a hint of the earlier U2 style in there. Edge described the album as eleven great songs, with no concept behind them and no attempt to produce a particular 'sound', although it was described prior to its launch as not a rock album, but "titanium soul". Bono's definition of soul music was that it tended to reveal rather than conceal the songwriter's inner emotions, and there certainly seem to be songs on this album that fit that description. 'Stuck in a Moment You Can't Get Out Of' (written about the suicide of INXS frontman and friend of Bono, Michael Hutchence) and 'In a Little While' are particularly good examples of this approach.

Brian Eno and Daniel Lanois were once again at the controls for this LP, but Steve Lillywhite and others such as Richard Stannard (who has produced for the Spice Girls among others) were also drafted in for particular songs. Without the electronically processed sounds that had characterised their previous three releases, this was the first record since Rattle and Hum not to have any input from Flood and Howie B. Eno and Lanois also contributed backing vocals and other synth and guitar parts on songs such as 'Elevation', 'Kite' and 'In a Little While'.

The photographs used on All That You Can't Leave Behind were taken in Charles De Gaulle Airport in Paris, and the video for Beautiful Day was also filmed there. The picture on the front cover of the album has been doctored slightly since it was first taken, and has caused a lot of debate among U2 fans as a result. Originally the board on the left of the picture showed the name of a departure gate in the airport, but the band changed this to "J33-3->". It is generally agreed that this is a reference to a Biblical verse, but the debate centres around deciding which one. It was thought to be John 33: 3, but there is in fact no such verse. The J has also been said to stand for Jeremiah or Job, although Jeremiah is the more likely of the two, as it reads "Call to me and I will answer you and tell you great and hidden things which you have not known." Sounds plausible.

This latest album unsurprisingly includes references to some of the political causes to which the band are strongly committed. The song 'Walk On' is dedicated to Aung San Suu Kyi who is a leading figure in the pro-democracy movement in Burma and has been under virtual house arrest since 1989. Because ATYCLB highlights the injustices present in Burma, the government there have banned it from sale and threatened anyone found in possession of it with a lengthy jail sentence. Each song on the LP has an individual icon associated with it, the one for 'Walk On' appropriately being the candle and barbed wire symbol for Amnesty International. A footnote in the sleeve notes urges fans to support action against the regime there by visiting the website burmacampaign.org.uk. Closer to home, 'Peace On Earth' makes a poignant reference to the victims of the terrorist bomb which killed 29 people in Omagh, Northern Ireland on 14th August 1998. The names "Sean and Julia, Gareth, Ann and Breda" mentioned in the song are actual names of people who died in the explosion: Sean McLaughlin (aged 12), Julie Hughes (21), Gareth Conway (18), Ann McCombe (48) and Breda Devine (1 year 8 months).

The LP's 10th track 'New York' initially caused fans to suspect that Bono and wife Ali were on the brink of separation due to alleged infidelity on Bono's part. In a dark and heavily Lou Reed-inspired song, Bono refers to a 'mid-life crisis' and says 'In New York I lost it all, to you and your vices'. Further lines such as 'I hit an iceberg in my life' and 'Lose your balance, lose your wife...in the queue for the lifeboats' led many to believe that Bono was writing an autobiographical song about his marriage breaking up, and when rumours suggested that he had been spotted living in U2's own hotel, The Clarence, this only added fuel to the fire. However it has recently been confirmed that Bono and Ali are expecting their fourth child next summer, so it would appear that all the previous stories were the products of over-active imaginations on the part of the fans or the media.

The album should finish with the gentle ballad 'Grace', but the british/Irish version of the CD has an extra track, 'The Ground Beneath Her Feet' which originally appeared on the soundtrack to 'The Million Dollar Hotel' film which was written by Bono. The words to this song were written by author Salman Rushdie who also wrote a novel of the same name. In my humble opinion Grace would have been a better closing song, but you can't have everything. At least it is nice to have an extra track. In America the LP was released with a separate bonus CD containing one track - 'Always' - which also appeared on the b side of one version of the Beautiful Day single. At least that way, the album finishes in the way it was intended to, i.e. with 'Grace'.

"There's no race - only the prize. There is no tomorrow - only tonight" - Stateless